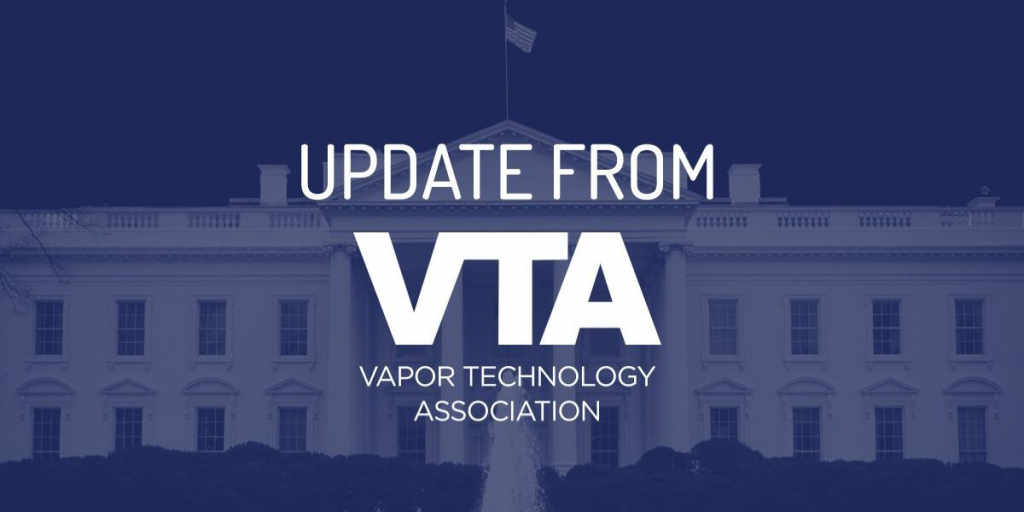 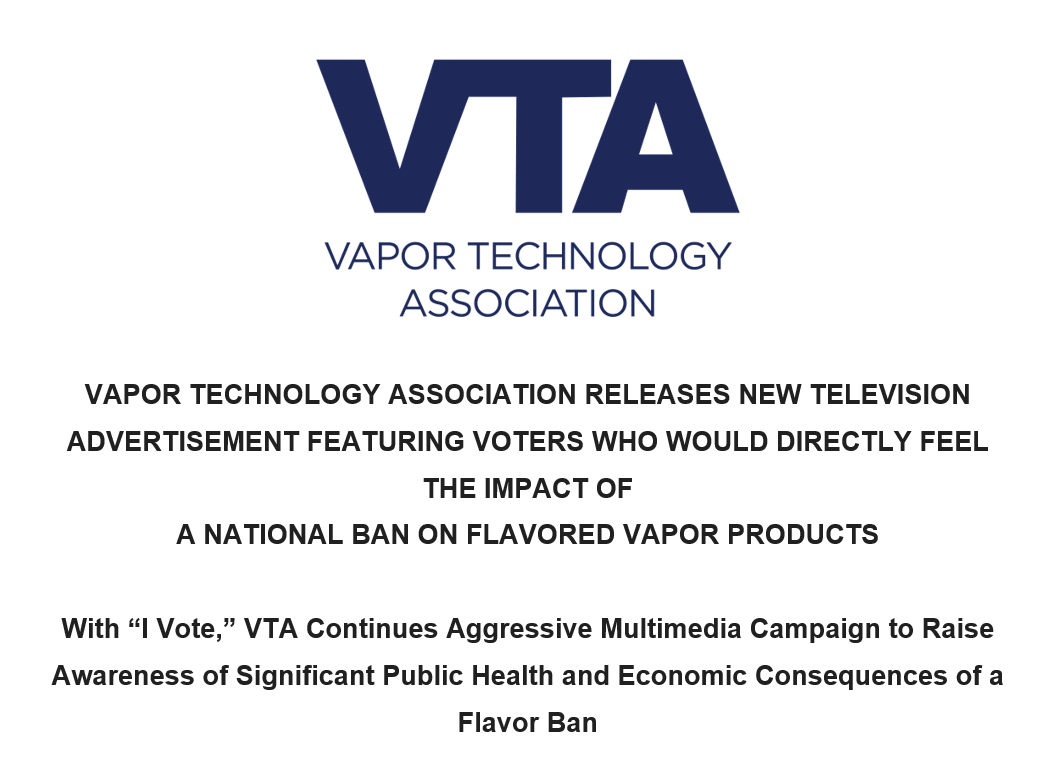 Washington, D.C., October 25, 2019 — The Vapor Technology Association (VTA), as part of an aggressive multimedia campaign to raise awareness of the significant adverse public health and economic consequences of a national ban on flavored vapor products, launched a new television advertisement in which voters who vape appeal directly to President Trump to preserve their access to flavored vapor products.

“I Vote” airs primarily on Fox News in Washington D.C. this week and features two registered voters, Sarah Rutland and Jeff Kathman, who are also small business owners in the state of Ohio and would be affected by a ban on flavors.

Registered voter Sarah Rutland said, “We know firsthand that vapor products are a lifesaving technology because both my husband and I successfully quit smoking by vaping. I had been a smoker for 20 years until I tried a strawberry peach flavored vapor product eight years ago. Since that day, I haven’t smoked a single cigarette. I’m very proud of that and very proud that our small business has helped nearly 11,000 adults stop smoking entirely with a wide variety of non-menthol and non-tobacco flavors. A flavor ban at our adult-only shop will eliminate 97% of our products which are non-tobacco and non-menthol.”

Registered voter Jeff Kathman said, “My mom died of lung cancer after smoking for more than 40 years. She didn’t have the opportunity to quit with vapor. My passion is to try to convert smokers to vapor products so we can prevent the 480,000 smoking-related deaths that occur each year. Flavors are critical to me – I quit smoking with strawberry kiwi – and our business. Only 10% of our customers buy tobacco and menthol flavors so, without flavors, we can’t stay open, nor can any other mom and pop. This issue means so much to me and my family.”

VTA encourages adults like Sarah Rutland and Jeff Kathman who rely on non-tobacco and non-menthol flavored vapor products to urge our federal government to preserve their access to this critical tool on vapersdovote.com.

“I Vote” follows “Promises,” the first advertisement of VTA’s multimedia campaign, which aired primarily on Fox News in Washington D.C. earlier this month and demonstrated the significant public health consequences of a ban on flavored vapor products.

Ten to thirteen million American adults rely on e-cigarettes to quit or reduce smoking. A flavor ban would drive these men and women to either revert to combustible cigarettes, which take the lives of nearly 1,300 Americans every day, or turn to a new and larger black market. Additionally, the licensed, FDA-registered, and FDA-regulated American vapor product distribution chain that is reliant on selling a wide variety of non-tobacco and non-menthol flavors would collapse, resulting in the closure of close to 14,000 small businesses and the loss of upwards of 166,000 jobs. Notably, more than 31,000 of the jobs at risk are in Florida, Michigan, Ohio, Pennsylvania, and Wisconsin.

Fortunately, there exist many alternatives to a flavor ban that would much more effectively limit youth access and appeal without threatening public health and the economy. VTA last month announced “21 & DONE!” a comprehensive plan to address underage use, including: raising the minimum age to purchase nicotine products to 21; implementing 21 serious marketing restrictions, including bans on all television advertising and bans on product names with references likely to appeal to minors such as candy, cartoons, and video games; a strong “three strikes and you’re out” enforcement regime; and increased taxes to fund education and enforcement, among other key policies.

Tony Abboud, Executive Director of the Vapor Technology Association said, “History has demonstrated that bans don’t work. As we have said from the start, VTA stands ready to work with the Administration, regulators, and lawmakers on the many real solutions that should be implemented to achieve the twin goals of restricting youth vaping, which is already illegal, and preserving flavored alternatives for adults desperately trying to quit smoking.”

ABOUT VTA
The Vapor Technology Association is the U.S. industry trade association whose 1,000+ members are dedicated to innovating and selling high-quality vapor products that provide adult consumers with a better alternative to traditional combustible cigarettes. VTA represents the industry-leading manufacturers of vapor devices, e-liquids, flavorings, and components, as well as the largest wholesalers, distributors, importers, and e-commerce retailers, in addition to hundreds of hardworking American mom and pop brick-and-mortar retail store owners throughout the United States.

For more information on the important work that the Vapor Technology Association (VTA) does to support your right to vape, visit their website. #ivoteivape